Inclusion of Dyes in Singular Crystals 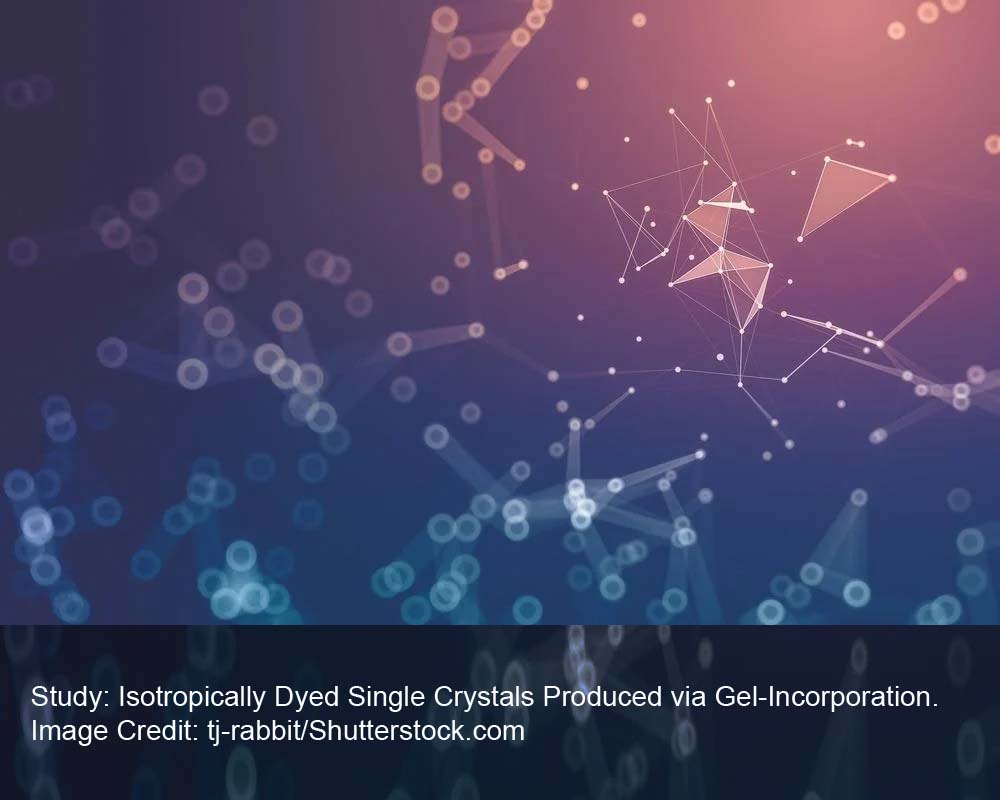 Inclusion of Dyes in Singular Crystals

Writing in the journal ACS Materials Letters, a team of scientists from Zhejiang University in China has reported the inclusion of dyes in nonlinear optical crystals using a gel-mediated strategy. The new research provides a strategy for facilitating the isotropic dyeing of single crystals and optimizing the properties of these crystals for advanced applications.

Dye Inclusion Crystals
Incorporating dyes into transparent crystals is an ancient practice, with the ancient Egyptians dyeing alum and sea salt crystals with safflower and indigo extracts for ceremonial and religious purposes. However, it was not until the mid-19th century that the scientific study of dyeing crystals started properly.

Research has indicated that the improved properties of these crystals are due to the dyes filling crystal vacancies. This optimizes the crystal structure and reduces defects within it. Moreover, dyes improve the electronic and optical properties of doped crystals, and improvements are aided by interactions between crystal hosts and doped molecules. 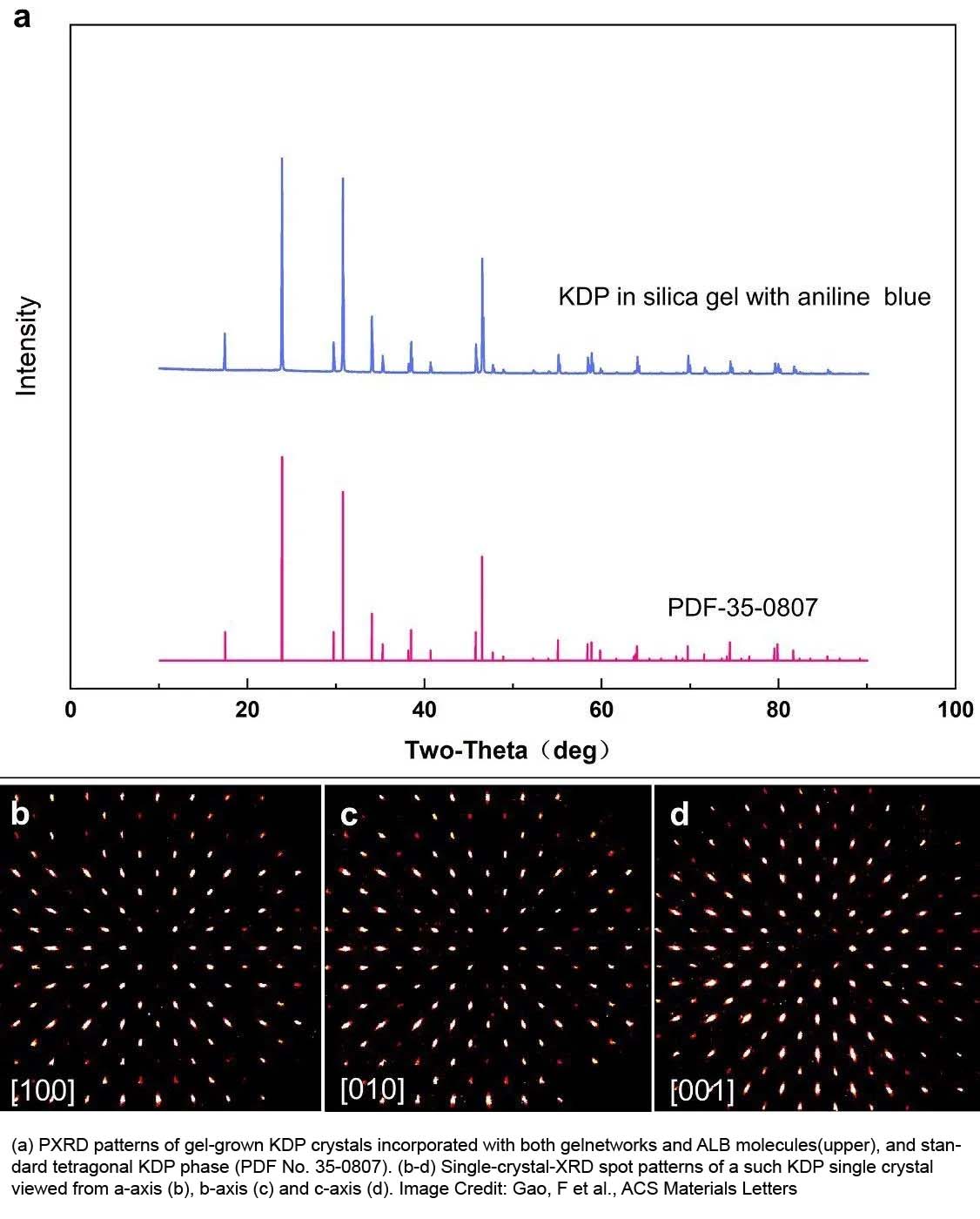 Current Challenges
There are challenges with doped-nonlinear optical crystals, however. Single crystals are anisotropic in nature, which leads to anisotropic dye incorporation due to electrostatic potentials varying with the crystal facets. This nonuniform incorporation limits the optical applications of dyed nonlinear optical crystals and further property improvements.

Gel-mediated incorporation routes could potentially improve the dyeing process of nonlinear optical crystals. They can achieve a more uniform distribution of dye within the crystal matrix, but compared to anisotropic routes, the incorporation behaviors of dyes dissolved into single crystals using gel-mediated strategies are not clearly understood.

X-ray diffraction revealed no distinguishable interruption of the single-crystalline nature of the dye-incorporated nonlinear optical crystals. Furthermore, in the presence of gel networks, both dyes displayed increased incorporation contents. Raman spectroscopy and mapping confirmed the uniform distribution of the dye. 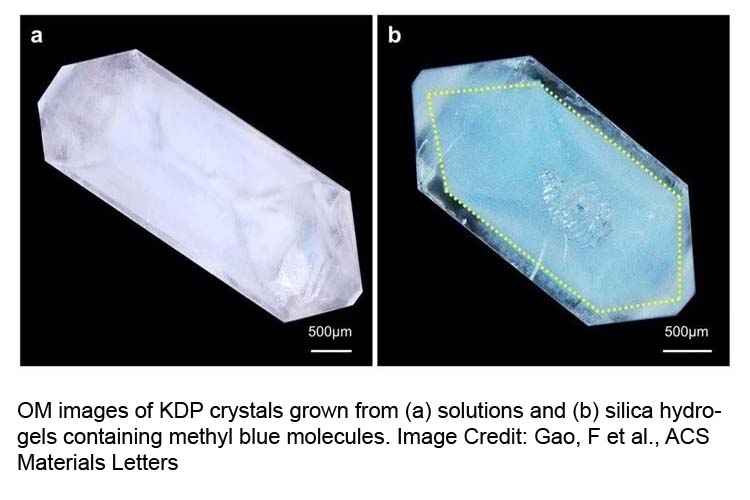 The authors investigated whether the gel networks were incorporated into the crystal structure along with dyes. This was evaluated using optical microscopy to monitor crystal dissolution processes. After dissolution in water, a solid residual blue block was left which had a shape consistent with the original crystal, indicating uniform silica gel network incorporation. The color of the block can be attributed to occluded dye molecules.

Based on their results, the authors concluded that the isotropic gel network-mediation dye incorporation process facilitates the uniform distribution of methylene blue dye in single dihydrogen phosphate crystals.

The method demonstrated in the new paper provides significant advantages over conventional fabrication routes and has the potential to further optimize nonlinear optical crystal properties and inspire the future design of hybrid systems such as ternary organic solar cells.

Disclaimer: The views expressed here are those of the author expressed in their private capacity and do not necessarily represent the views of AZoM.com Limited T/A AZoNetwork the owner and operator of this website. This disclaimer forms part of the Terms and conditions of use of this website.

Reg Davey is a freelance copywriter and editor based in Nottingham in the United Kingdom. Writing for News Medical represents the coming together of various interests and fields he has been interested and involved in over the years, including Microbiology, Biomedical Sciences, and Environmental Science.