Mali’s Bogolan, the dye of the earth 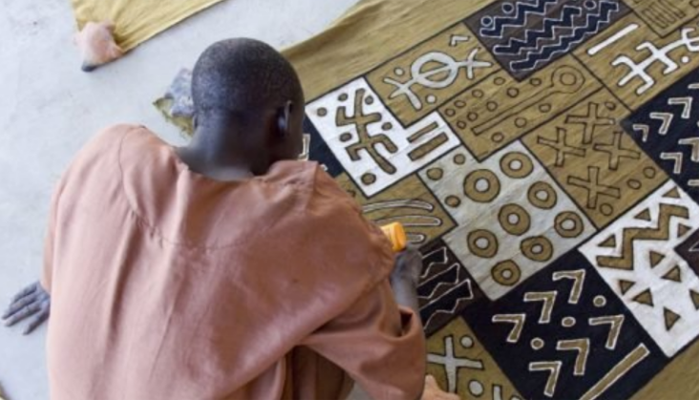 Mali’s Bogolan, the dye of the earth

At the Ndomo Institute in Segou, Mali. JEAN-PIERRE DE MANN/AFP

“Natural dyes” (3/4) - Mali's emblematic dyed fabric was discovered by accident. Despite industrialisation, this tradition of vegetable dyeing continues to be common practice.

The fabric is thick and heavy, adorned with brown, black, ochre and white geometric shapes as well as ideograms. Recognisable to all, this fabric – dyed on woven cotton – is one of Mali’s most emblematic textile traditions and historically worn by the Mandingo communities.

“However, natural dyeing is becoming proportionally less common and some even use bleach to create contrast,” says artist Aboubakar Fofana, a fervent advocate of natural dyes. It has been difficult to distinguish the authentic from the pale, synthetic copy, ever since the fabric became commercially available in the 1980s. Poor quality bogolan is sold on market stalls, which contributes to the decline of local know-how. To preserve the craft, a few workshops have been set up in Mali – notably in the region of Ségou, east of Bamako – where the tradition is said to have originated.

Bambaras, Senoufos, Minianka…
This is the case for the Ndomo centre, a social enterprise created by master craftsman Boubacar Doumbia. “The bogolan technique was discovered by chance,” says the author of the short book L’évolution des Teintes Naturelles Basilan, Bogolan et Gala (published by Jean-Pierre Daudier, 2006).

“A few centuries ago, the Mandinka people used the natural colours of certain tannin plants from their land to colour their clothes. According to legend, grey clay from the pond touched a garment dyed yellow ochre and a black stain remained. It was on the basis of this observation that the bogolan technique was born,” he says.

Fabrics dyed with these vegetable dyes were then worn solely by the Mande. Today, they are worn by different cultural groups such as the Bambara, Senufo, Minianka, Bobo, Malinke and Dogon.

“From the earth”
To obtain the background dye, the fabric must be soaked three times in a solution of birch leaves or ’ngalama’ – its name in Bambara – a medicinal plant that is also used as an antiseptic. Each time it is soaked, it is dried and then soaked again on the same side and exposed to the sun. The dyed cloth is called basilanfini.

The colours obtained from decocting the leaves and bark produce shades of yellow and red ochre. These sober and natural tones are reminiscent of the earth. The term ‘bogolan’ means ‘from the earth’ in Bambara, which refers to the designs made from fermented mud – either from the Niger River or nearby ponds. These black designs have a decorative function and are often made by women.

“There are about 15 signs that have been passed down from generation to generation, such as the symbolism behind two intersecting roads, the winding path, the family and the backbone of the fish,” says Doumbia.

The messages conveyed advocate living together, cohesion and the path to take in life. Once the designs have been applied to the fabric, it is rinsed with clear water to remove any excess clay mud. The decorated and finished fabric is called bogolanfini.

Protective value
Traditionally, a person wore bogolan to keep themselves safe from harm. “According to the beliefs of the time, it could protect hunters, pregnant women, the elderly and infants,” says Habi Diarra, creator of Maison Laadani, an interior design brand that sells throws, plaids, wall rings and other bogolan cushions. The wide range of products that this brand offers truly reflects how popular this textile has become in contemporary homes.

This fabric has been worn by many stars from within the fashion and pop culture industry: from Beyoncé to Salif Keïta. This international recognition would not have been possible without the work of Malian artists from the Kasobané Bogolan collective, who have been incorporating dyed fabric into contemporary artworks since the 1970s. Their work is available at the Institut National des Arts du Mali, the first institution in the country to offer Bogolan education.