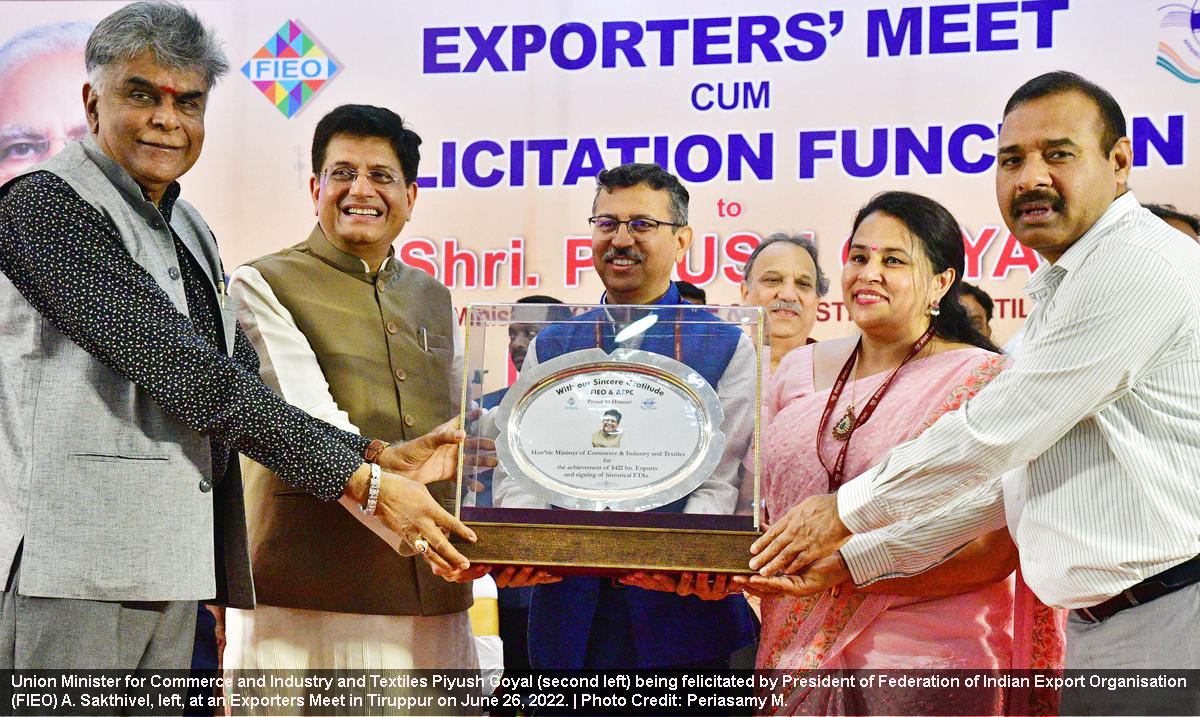 The Central government wants to create 75 textile hubs across the country on the lines of Tiruppur to generate jobs and support higher textile exports, Union Minister of Textiles and Commerce and Industry Piyush Goyal said in Tiruppur on Sunday.

Speaking at an exporters’ meeting, organised by Federation of Indian Export Organisations (FIEO) and Apparel Export Promotion Council, the Minister explained that in 1985, Tiruppur’s annual garment exports were worth ₹15 crore. Registering a compounded annual growth rate of almost 23% since then, Tiruppur’s garment exports in 2021-2022 was ₹30,000 crore.The garment industry in Tiruppur provided direct employment to six lakh people and indirect employment to four lakh people. Also, nearly 70% of these workers were women and people from the marginalised sections.

Almost four crore people were employed across the textile value chain in the country and the current size of the industry in the country is ₹10 lakh crore. The sector has the potential to grow to ₹20 lakh crore in five years. “Let us work to identify 75 districts across India. Workers come to Tiruppur from Odisha, UP, Assam. Let us identify areas where entrepreneurs [from existing hubs] can go and set up units,” he said, adding that these clusters would have all facilities and provide social security to the workers.

Despite challenges due to the COVID-19 pandemic, geo-political situation and inflation among other things, India was one of the fastest growing economies in the world. If India grew at 8% every year on a compounded annual growth basis, the economy would double in about nine years and after 30 years, India would be a $30 trillion economy, he said.

Mr. Goyal said the South India Textile Research Association here had developed a machine to make about 300 low cost sanitary napkins in a minute. The napkins would be sold at PM-JAY outlets across the country. A meeting was planned with the Health Minister in this regard on Monday.

L. Murugan, Union Minister of State for Information and Broadcasting, highlighted the benefits of the newly-signed FTAs.

A. Sakthivel, FIEO president, sought Mr. Goyal’s intervention for solution on the money stuck in exports made to Sri Lanka and implementation of Rupee payment system for exports to Russia.