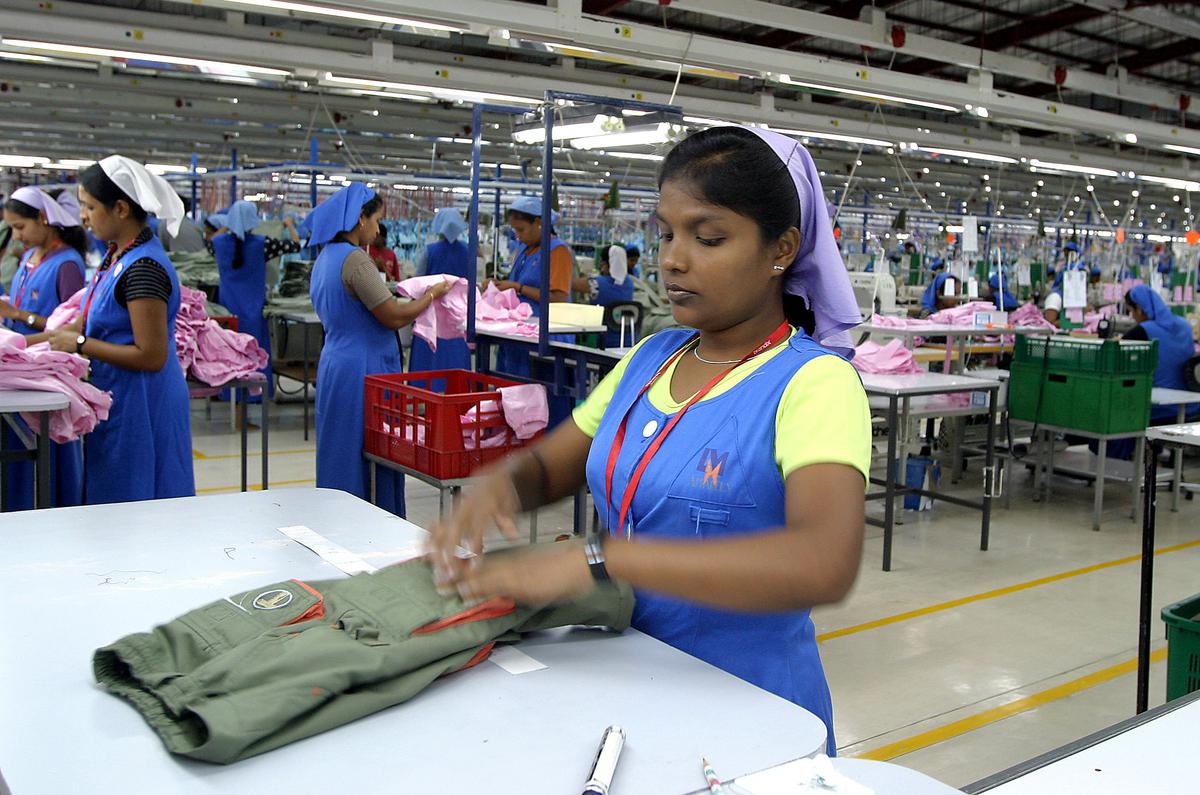 Thousands of garment workers faced reprisals and worked in tough conditions as COVID-19 protocols were violated and outbreaks swept through factories, said a report by a global labour rights group this month

The pandemic was hard enough. Now, Sri Lanka faces an economic crisis of its own making that is taking a heavy toll on low-paid female garment workers sewing clothes for wealthier women in the West.

"I have never seen anything like this in my 20-year career," said one factory owner, who employs 20 women to make vests and slips, some of whom have been on his payroll for over a decade.

Now Anthony - not his real name - says he is leaving the rag trade, hit by rolling power cuts, soaring costs for raw materials, shrinking orders and a labour shortfall, a fistful of problems for an island that depends on exports for income.

"The game is over," said Anthony, whose small textile operation in Moronthuduwa lies close to Sri Lanka's main city of Colombo. "I am compelled to close my factory."

And with it, 20 local women will be compelled to find new jobs or else 20 families will be short of cash.

"I can only imagine the desperation their families will feel," Anthony said. "But, is it my fault?

"This is the state of affairs across the country."

Shutdowns, shortages, pay problems and looming strikes are playing out across the island, with the female backbone of the garment industry paying the highest price.

Many rural, low-paid women have already lost their jobs or say they have taken on loans or extra shifts to make ends meet each month - all for the cost of a Victoria's Secret negligee.

"One luxury brand garment piece stitched in our factory is worth our monthly salary. When they earn millions of dollars off of our many hours of arduous work, we are paid little," said 22-year-old Charika Fernando.

Victoria's Secret did not immediately reply to a request for comment about pay and conditions among workers at its suppliers in Sri Lanka.

A Sri Lankan woman works in a garment factory in Maharagama, on the outskirts of Colombo, Sri Lanka. File | Photo Credit: AP
Garment making is Sri Lanka's No. 2 foreign exchange earner, with about 300 factories making clothes for dozens of well-known global brands.

The industry contributes 6% to the country's overall gross domestic product (GDP), providing direct employment to 3,50,000 people and to another 700,000 indirectly.

Hard-hit like so many other industries in the pandemic, the garment sector seemed to be on its way back earlier this year as demand picked up post-lockdown and coronavirus infections waned.

Numbers show a post-pandemic recovery was well underway, with export earnings for garment makers up 22% to $514 million this January, compared with January 2021. 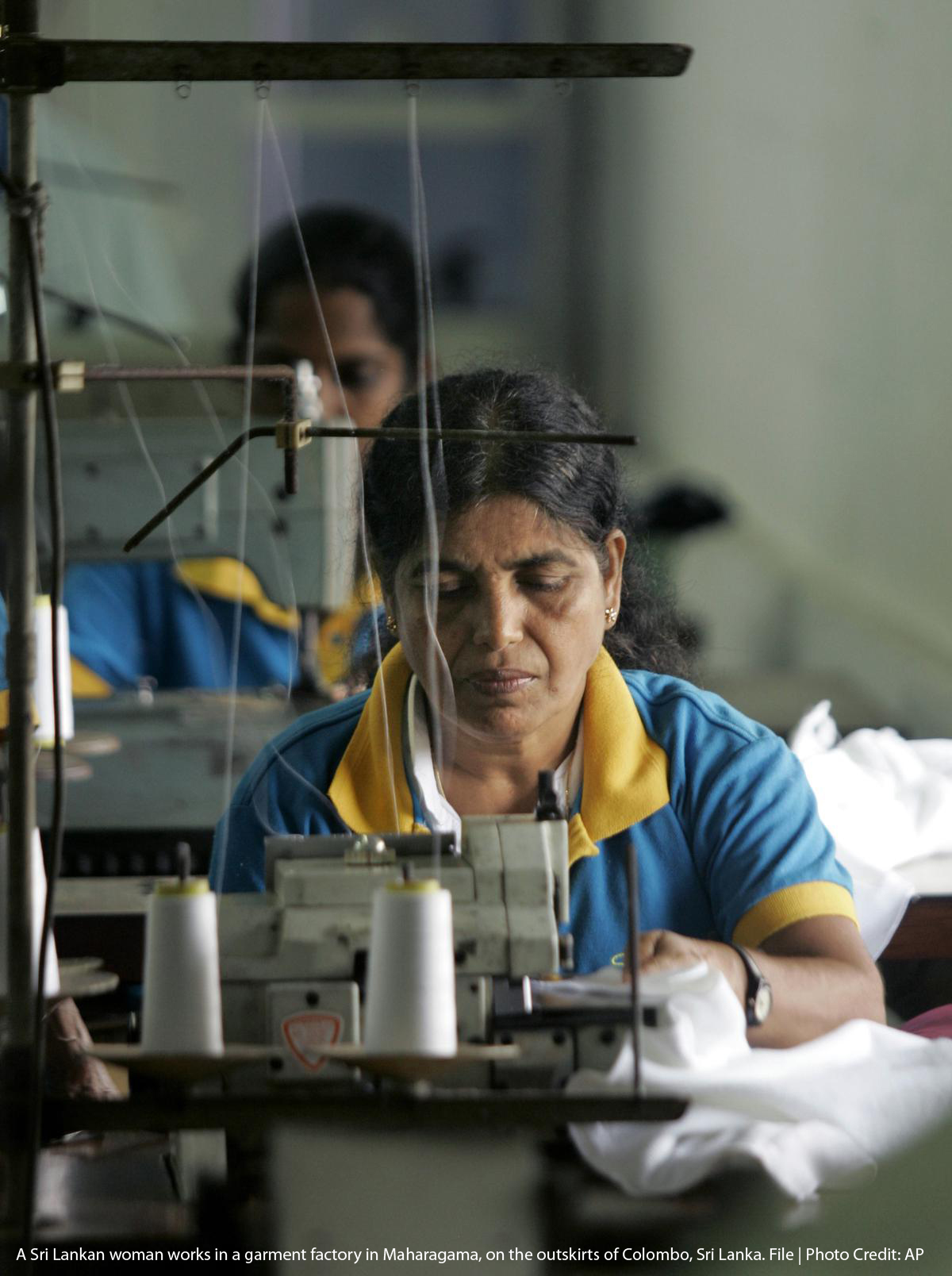 Now, a domestic economic crisis fuelled by a foreign currency shortage is squeezing the island just as it seeks to slough off the deadliest epidemic in decades, a crisis that had already wiped out years of growing prosperity. 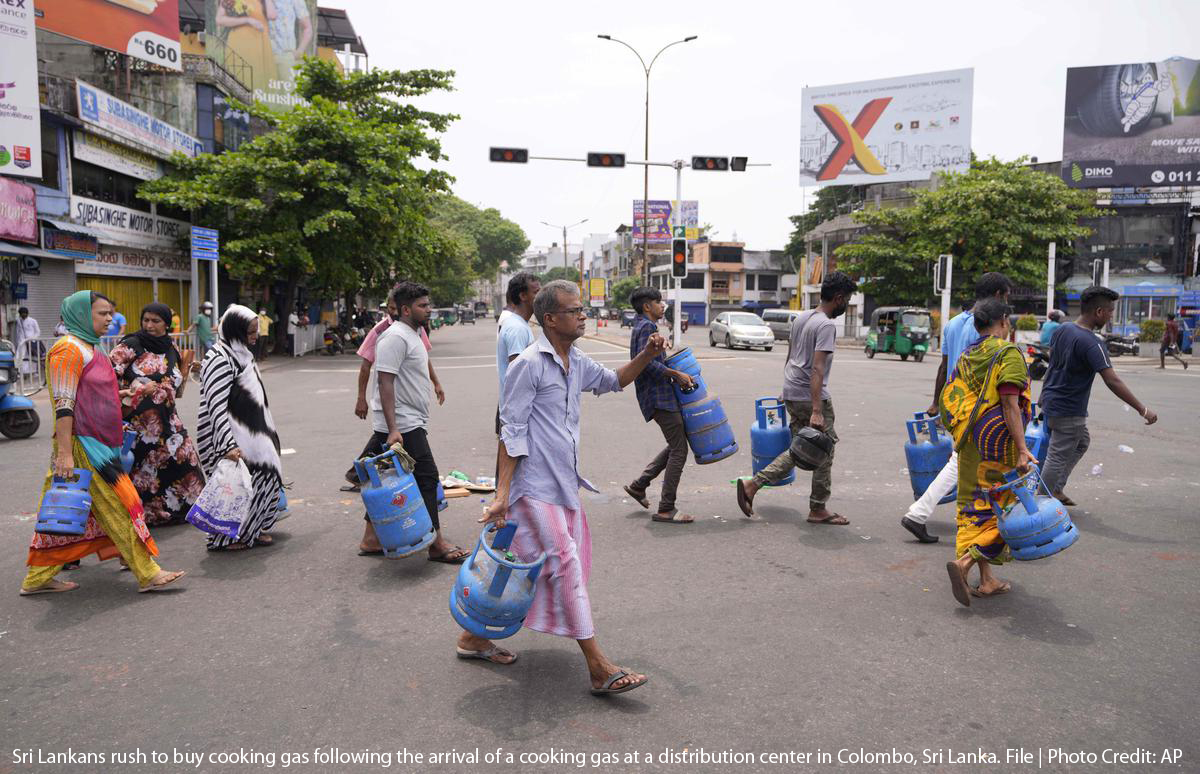 Sri Lanka is facing its worst financial crisis since independence in 1948, with foreign exchange reserves shrinking 70% to $2.36 billion in January.

The dollar shortage has left the island struggling to pay for imports including food, medicine and fuel.

Unprecedented blackouts - power often dies for hours at a time - have shuttered the most energy-intensive industries, textiles among them, and disrupted shipments to the West.

The government says help is on its way but shops cannot wait and some big brands have already turned to alternative markets, such as Bangladesh and India, to fill the gap.

Trade unions blame underlying problems that had lain hidden for years and have now surfaced, highlighting the stark power imbalance between Western brands and their Asian workers.

"We have to spend more than half of our wages on transportation to and from the workplace ... leaving almost nothing to support our family or maintain a roof over our heads," said Jasintha Nilmini, who works at an underwear factory.

"The situation has only become worse." 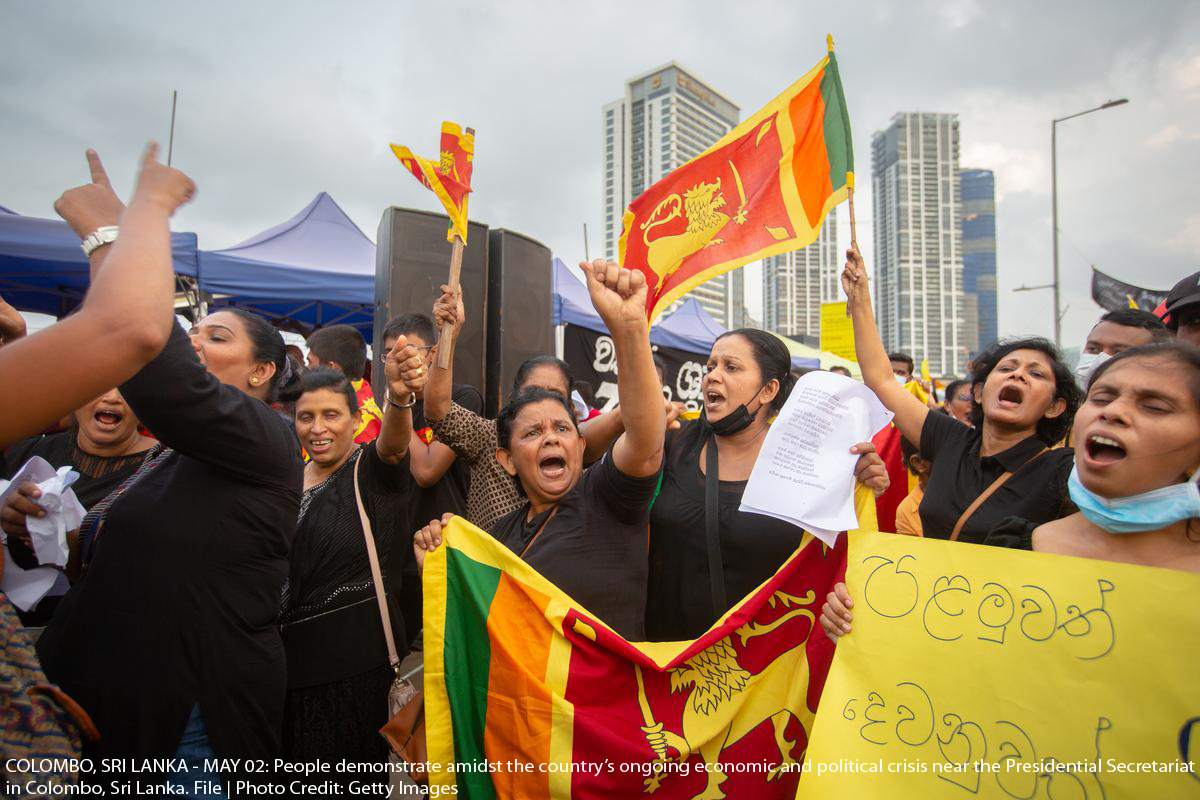 Women make up about eight in every 10 workers in the sector and most come from rural areas in search of jobs - women like Fernando's mother Rani, who moved 120 km (75 miles) from her village to make clothes in the commercial capital's Katunayake Free Trade Zone (FTZ).

"My mother worked as a trimmer and ironer," Fernando said. "From my mother's experience, I understood how demanding this task was for her body."

Nevertheless, she took the same path, choosing garment work as her best way out of poverty.

"In March I earned ₹40,000 ($116) but everything has become more expensive," said Fernando, a machine operator who makes clothes for big labels including Victoria's Secret.

"The prices of vegetables, meat and fish have all gone up. In February, following trade unions' demands, we received a salary increase of ₹2,500. And just before the salary increase, my landlord raised the rent of my room to ₹15,000 per month."

Plus her workload has ballooned, she said, which often means 12-hour days, six days a week.

"The targets have gone up. If we don't reach the target, we will have four hours of overtime. Our factory set a historic record for the highest monthly targets in March. Factory owners must have reaped the harvest," she said.

"There were moments when I would burst into tears with despair. We are not compensated for our sick days. We don't get vacations."

GLOBAL PROBLEM
From Central America to South Asia, the low pay, long hours and risky conditions endured by many workers has blighted the glitzy image of the fashion industry.

The pandemic exacerbated their plight. 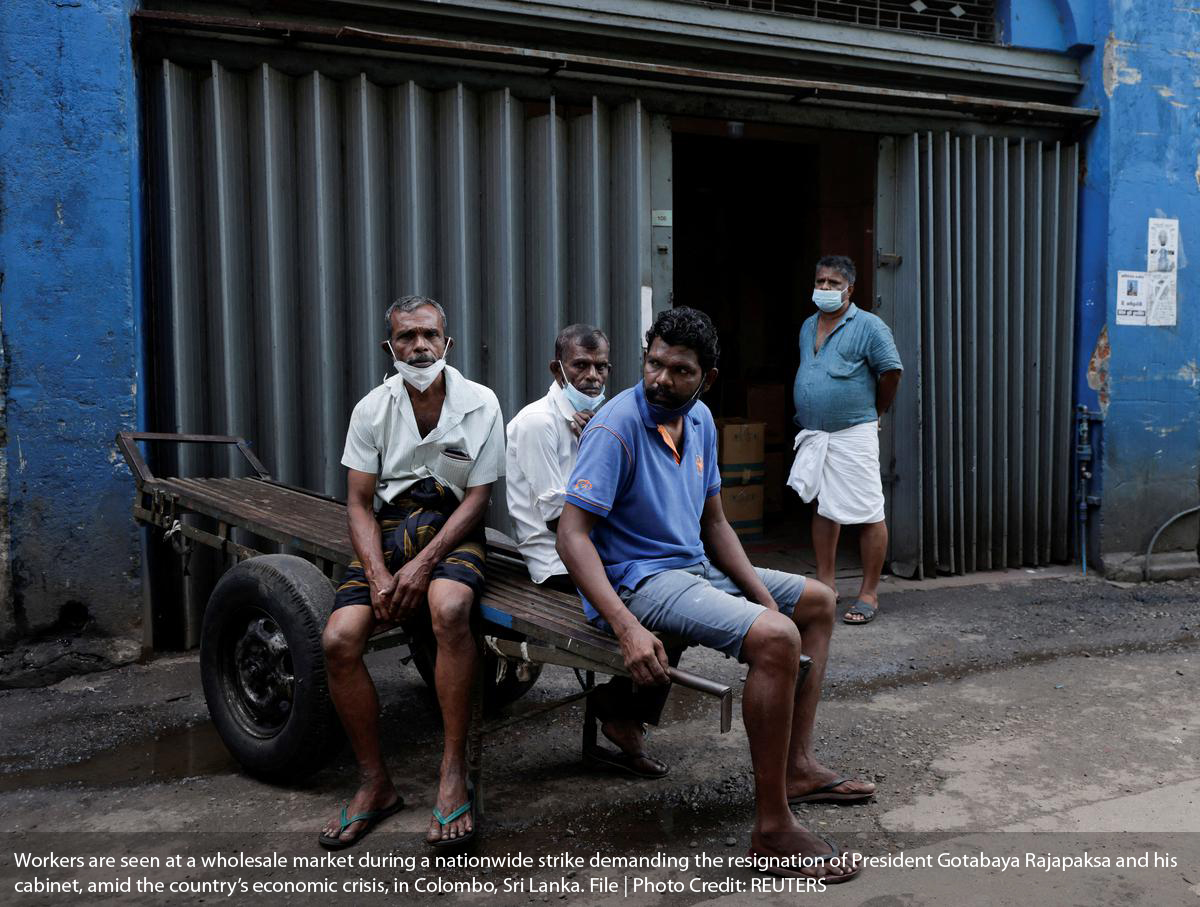 Workers are seen at a wholesale market during a nationwide strike demanding the resignation of President Gotabaya Rajapaksa and his cabinet, amid the country’s economic crisis, in Colombo, Sri Lanka. File | Photo Credit: REUTERS
Thousands of garment workers faced reprisals and worked in tough conditions as COVID-19 protocols were violated and outbreaks swept through factories, said a report by a global labour rights group this month.

And globally, a series of high-profile disasters at textile factories, reports of abuse in company supply chains and heightened ecological awareness has pushed some buyers to shun cheap, throwaway fashion and its high hidden costs.

"If you care about women's rights, you should worry about how the fashion business runs," said Padmini Weerasooriya, who defends garment workers in Sri Lanka and said it was more difficult to unionise women.

"They are repressed not just at home, but also at work, school, and in their families," said Weerasooriya, a trade unionist for more than 20 years.

"We want everyone who works in the garment industry to be paid a fair wage."